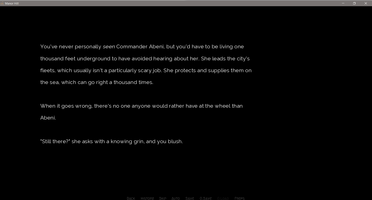 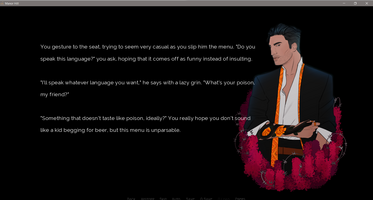 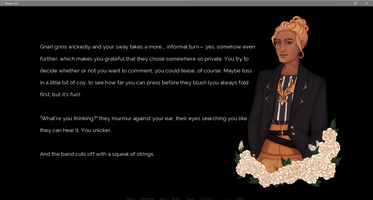 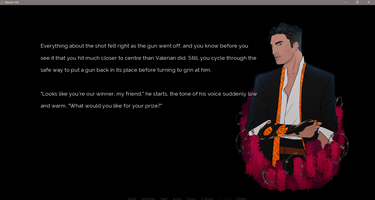 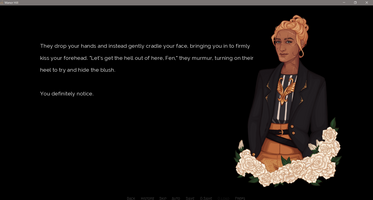 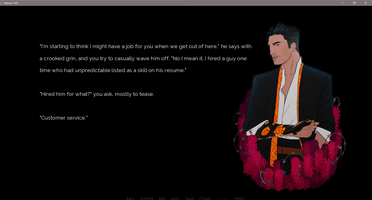 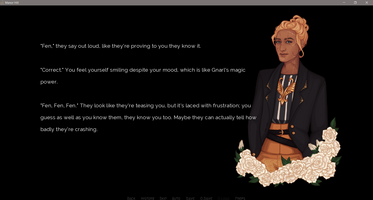 It happened you guys. I threw the whole thing together into ONE, SINGULAR FILE.

So now play the prologue and all the routes from the comfort of a single executable. Never have to awkwardly reset a variable as if you have forgotten your own name/gender partway through the story. The new file also comes with cool shit like new art (design-wise, I'm still hunting for an Abeni artist), font, and splash screens !! Also most of you probably won't notice but I also gave APK/Android users a cool new icon so when it's installed it doesn't look like weird Ren'py garbage !!

Another major change, and I'm sorry if this disappoints anyone, is the removal of the platonic routes. Survey showed that none of you were taking the darn thing and it was just making my life harder, so I cut it. This gives me less opportunities to make the UI ugly while I desperately try to differentiate each route, so you're welcome? The prologue is pretty rife with romantic tension anyway so while I think I was able to create two separate routes, it was making things impossible coding wise. Honestly yesterday I was on my couch and I spent all day trying to organise Valerian's race sequence. It was a rat's nest of code, and not a cute little rat with clothes on either.

Anyway I did the majority of this with a major, pounding headache yesterday so if you run into any bugs I somehow missed, please let me know and I can help you out. Sorry if this is wildly inconvenient to anyone save-wise, but it had to happen eventually and aren't we all glad it happened in chapter two instead of literally a moment afterwards.

All told, the game is at the moment approximately 46 178 words long and growing. I'm on the lookout for an artist for Abeni, with my main frustration at the moment being trying to catch artists while they're open and paying for art with the budget I have (donated entirely by you guys). Thanks to everyone who has donated/left a comment so far, and I hope this change encourages more of you to do so.

And one more time, god bless Leyla for her beautiful art that she did pro bono because I can't read numbers in the order they appear and created a few monsters before she swooped in and fixed my shit.

Out of the fire and into the flame.